The gun fire is believed to have come from members of Jund al-Sham [Soldiers of the Levant], a Sunni group supporting Fatah al-Islam.

As the siege continued, Abu Salim Taha, a spokesman for Fatah al-Islam, claimed that troops from Unifil, a multi-national peacekeeping force whose remit is largely concerned with monitoring southern Lebanon, had taken part in the shelling of Nahr al-Bared camp.

A deputy spokesperson for Unifil denied the allegations. Yapmina Bouzaine said: "These claims are utterly unfounded. Unifil's maritime task force have no part whatsoever in the developments in and around Nahr al-Bared camp."

She said the maritime task force was acting within its original mandate, assisting the Lebanese authorities in preventing the illegal flow of arms via the sea.

There has been fighting between soldiers and Islamic militants at a second Palestinian refugee camp in Lebanon, security officials say.
The violence in the Ain al-Hilweh camp, near the southern city of Sidon, is said to involve Jund al-Sham militants. Two people - a soldier and a civilian - were injured when suspected militants fired a grenade at an army checkpoint.

It is not clear if the violence is linked to the fighting at the Nahr al-Bared refugee camp in the north.


A small bomb was found near a beach resort popular with U.N. peacekeepers in south Lebanon on Wednesday morning, security sources said. They said the 2 kg (4.4 pound) charge had been timed to go off at 6 a.m. (0300 GMT) but failed to detonate.

Fatah al-Islam last week accused the 13,000-strong U.N. force, which has a naval component, of shelling Nahr al-Bared from the sea, a charge denied by the peacekeepers.

KIRYAT SHMONA, Israel (Reuters) - Two Katyusha rockets hit the northern Israeli town of Kiryat Shmona near the border with Lebanon on Sunday, the Israeli army and police said. It was the first such attack since last year's war between Israel and Hezbollah guerrillas in Lebanon.

There were no casualties.

A Hezbollah spokesman denied any link to the attack. A security source in Lebanon said Palestinian fighters were suspected of firing at least three rockets from southern Lebanon into Israel, an area bombarded by thousands of Hezbollah Katyushas last July and August.

Palestinians fought a small-scale civil war in the Gaza Strip, south of Israel, last week, in a setback to their hopes of founding a state there and in the West Bank. Many more Palestinians live as refugees in Lebanon and other countries. A new Palestinian emergency government was sworn in in the West Bank on Sunday.

"We're ascertaining the facts on the ground," said Yasmina Bouziane deputy spokeswoman for the UNIFIL peacekeepers.

Witnesses in south Lebanon said a Lebanese army patrol found the launch site near Taibeh where a fourth Katyusha rocket apparently failed to launch.. Israeli emergency services and police spokesman Micky Rosenfeld said there were no casualties reported in Kiryat Shmona but a car and roadways were damaged.

One television channel showed a car with its front smashed and with a shattered windscreen as well as an apparently shrapnel-sprayed company sign in a local industrial park.

The strike came as Palestinian President Mahmoud Abbas named an emergency government following the violent takeover of the Gaza Strip by Hamas Islamists who had led the government Abbas dismissed on Thursday.

Fighting in Gaza has divided the four million Palestinians living there and in the West Bank. Many more Palestinians live in refugee camps in Lebanon, as well as other neighboring countries.

An international peacekeeping force was deployed in southern Lebanon last year after the war to prevent rocket attacks. "We were outside the factory when suddenly there was a frightening boom," one man told Israel's Channel 2 television.

"We saw a black cloud in the sky and we came over to inspect the damage and we saw this," he said, pointing to a hole in the road next to the damaged car, which had apparently been empty.

(Additional reporting by Ori Lewis, Adam Entous and Alastair Macdonald in Jerusalem and Yara Bayoumy and Nadim Ladki in Beirut)


Shadowy Group Claims Responsibility for Rocket Attack on Israel
A previously unknown militant Islamic group claimed responsibility on Monday for a rocket attack on north Israel as the Lebanese Army and U.N. Peacekeepers went on full alert in search of the assailants.
The self-proclaimed group, "the Jihadi Badr Brigades – Lebanon branch," vowed in a statement faxed to The Associated Press in Beirut to continue attacks on Israel.

"We had promised our people Jihad (holy war). Here, we again strike the Zionists when a group from the Jihadi Badr Brigades struck the Zionists in the occupied Palestinian territory," the statement said. ..

Authenticity of the group's claim could not be immediately confirmed. Meanwhile, the Lebanese army and U.N. peacekeepers went on full alert in search of the unidentified assailants.

Armored vehicles of both the Lebanese army and the U.N. Interim Force in Lebanon (UNIFIL) patrolled the road running parallel to the border with Israel.

The Lebanese army also set up snap checkpoints in the border zone right after the Sunday 5 pm rocket attack in search of a civilian vehicle which the assailants reportedly used to launch the rockets into the northern Israeli town of Kiryat Shmona, causing no injuries and inflicting minor damage.

UNIFIL said the rocket attack from Lebanese territory on Israel was a "serious breach" to the cease-fire that ended last summer's Israel-Hizbullah war, and urged the parties to exercise maximum restraint to prevent an escalation...

UNIFIL and Lebanese troops have intensified patrols of the area "in order to locate the perpetrators and prevent any further attacks," said UNIFIL spokeswoman Yasmina Bouziane.

The peacekeeping force urged the parties to exercise maximum restraint to prevent escalation...

Prime Minister Fouad Saniora said the attack aimed to destabilize Lebanon by casting doubts about the ability of the army and UNIFIL to protect the border zone.

Bouziane said that the Lebanese army "located the launching area and found four rocket launchers with time devices. There were three fired and the fourth failed to fire."

The Lebanese army said in a statement three 107 millimeter Katyusha rockets were fired at Israel by "unknown elements" and that a search was underway to find the attackers. Troops sent to search the suspected launching area found a fourth rocket equipped with a timer.

A Lebanese security said that the rockets were launched using timers from an area between the villages of Adaisseh and Kfar Kila, a few kilometers from Israel's border. (...)

Late Sunday, a drone aircraft could be heard circling over the southern port city of Tyre, witnesses said.

UNIFIL and the Lebanese army have no drones, and Israel has frequently flown such small aircraft to monitor movements on the ground in southern Lebanon.
http://web.naharnet.com 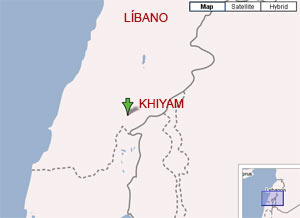